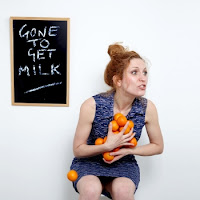 Ieva Kuniskis- Gone to get Milk, as part of Resoltuion! 2013

Ending up with a whole lot more than you bargained for… it’s a familiar concept, to which we can all relate. Though, ingeniously, Ieva Kuniskis arranges what is arguably an innovative commentary on the more trying aspects of life, in a way that perhaps hints at something a little deeper than the title might suggest.

Oranges, that we can only presume were never on the list, are unleashed and left to their own device by the first performer as she enters and quickly exits again in a bid to make the toilet, or at least that’s what the audio suggests. The space, prior to the invasion of the mass of oranges, is occupied by only a chair, a table, and under the latter, someone who perhaps remains veiled by the darkness of her ever familiar setting, until the strains that she perpetually masks, eat at the walls of her serenity.


The content of Gone to get milk, which balances fruitfully on the margins of dance and physical theatre, is fuelled mostly by a blend of simple and quirky gesture. Gesture that despite being accompanied by a somewhat comical score, subtly and effectively unearths the feelings that seemingly lurk in the depths of ones being, when strangled by what reveals itself to be the vicious cycle of an unworkable, yet comfortable situation.


Three Intriguing solos by three equally intriguing performers capture what might be the means in which an individual best attends to the hopelessness of his/her surroundings. while the interplay of the three as they amalgamate seamlessly in and out of various duets and trios is made powerful by an overtly stifling tenderness.


Refreshing is that Gone to get milk’s cleverly pitched, and thought- provoking undercurrent, refrains from hindering the comically untamed visual that Kuniskis creates. No element of this piece attempts to be, nor relies upon, anything more than an honest artistic flair of all parts. Which if I am honest, is a little more than can be said about the remainder of the programme.
Posted by Unknown at 04:04